Technology and design in general

HomeTechnology and design in general

This section of my website is about bicycle racks and moped passions, both ripe and immature. It’s still at the development stage. I may add a photo of street furniture that appeals to me or some other beautiful thing. There’s no internal logic pushing me, as poet and musician, to talk about mopeds and street furniture here. But it is a part of me. Maybe there’s a relationship between beautiful music, beautiful words and beautiful things.

Note: In February 2012 I added a Graphotype-section. Not a happy story so far but I like to share it anyway.

Link to my GRAPHOTYPE page

A passion for mopeds

The last time I read anything passionately, I was – I think – thirteen and it must have been about mopeds. Jaap Joppe’s Brommers, scooters en motoren (Mopeds, scooters and motorbikes), no. 841 in the Prisma series, published by Het Spectrum in 1963. Later it became my bible. Before reaching legal moped age I already had six of the things, rejects from tender-hearted uncles, neighbours and teachers. You can safely assume that this was the source of my interest in old cars. As a teenager I devoured a book on the subject – Autotechniek glashelder (Automobile technology made abundantly clear) published by Stichting V.A.M., The Hague, 1961. The principal role in the book was played by the Startermans family, who indulged in old-fashioned dialogues. Devouring the book was not difficult: it was already in bits in the shop.

Hey, listen, I know nothing about this subject. But my thoughts go along these lines:
Street furniture can be beautiful. My admiration for attractive designs applies especially to street furniture, because the stuff has to be vandal-proof, not too expensive and – especially – useful and not overly abstract. Difficult requirements for a designer. Or are they? Hence my rejoicing when I see something beautiful and, in silence, thank not only the designer but also the policymakers who have taken the courageous responsibility for putting this wonderful stuff on the street. And what becomes apparent when you see such things? 1: Solidity doesn’t have to be dull. And 2: What is beautiful doesn’t usually get smashed.
I’ve only just started taking photos. A few samples can be seen below. If you want to submit your own photo(s) or know of any useful links – yes please! 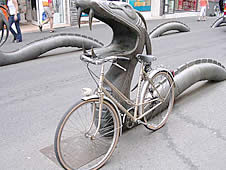 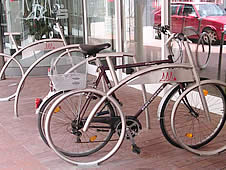 Other kinds of design

Don’t know the first thing about it. Eyes glaze over when others start name-dropping. Feel like a real peasant. Sometimes I regard something as really beautiful – and turn out to be completely wrong… But I still enjoy it – enjoy enthusiasts such as Buckminster Fuller, Victor Papanek, Desmond Loewey (lovely cars, too!), the Amsterdam School, the English vacuum cleaner designer James Dyson. I believe that external beauty and internal beauty in this field are absolutely related.

There are, within us, certain aptitudes that manifest themselves – and there’s nothing wrong in that, and other aptitudes. One aptitude I possess, and that emerged in very early childhood, was for measurement, balance and general tinkering with things. My tinkering (my DIY tendency), however, was not (as I was told later) really appreciated because I demolished anything I could get my hands on. I stuck pins into electric sockets and tipped a gross of toilet rolls down the attic stairs. There’s a photo showing me, still an infant, trying to balance a doll on a balloon. Why do we do this sort of thing? Later I observed and learned from my maternal grandfather when he came to do odd jobs around the house. He used to straighten bent nails so he could re-use them. Just like in the Third World, as I realised later. And I’m still incapable of throwing anything away. People mock me – but they soon shut up when I produce exactly the spare part they were looking for. Fortunately I’m not the only one. I’m the answer to the prayers of families of deceased DIY fanatics: after all, it seems so disrespectful to put out your father’s collection of screws with the household rubbish. That’s how I keep on being given new stuff, causing me to sort through it all again, occasionally saying “Nice piece, Bill, thanks a lot” (or some other name) when I’m given something interesting that I didn’t already have. 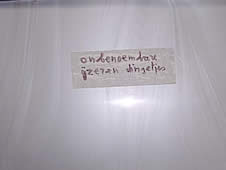 Much later I wrote down the story of all this tinkering, the why’s and the wherefore’s, and published it as an article entitled Over knutselen (On Tinkering), complete with drawings of gearboxes. I placed it in the magazine De Geus, of which I was editor in the 1980s. It’s too long. Maybe I’ll place it here some time, together with the rest of the history of De Geus. 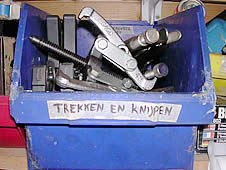